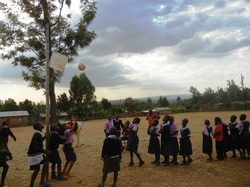 Formal athletics are lacking at most primary schools in Kenya. Students are constantly participating in informal soccer games, volleyball, running, skipping rope and other athletics. But they often lack a formal outlet where they can learn and improve their skills and be coached to work as a team. At Pathfinder Primary, we have introduced basketball and soccer leagues where the children receive coaching and instruction on not only honing their own skills but on playing as a team as well.

The leagues have been a tremendous success. We have two age groups for each sport - Classes 3 - 5 and classes 6 - 8 - and have both boys and girls teams. Plans are underway to improve the current playing fields and to add more sports - including volleyball, netball and badminton - to our leagues. We are also in the process of planning community-wide tournaments.
Powered by